Just wanted to say thanks for keeping up with me, my new adventures and my thoughts as well, it means a lot to me, that you just came here on my blog, to read all about what happend previously in my life.

As the title already gave away it was a very wet week for me. I don’t know why everything revolved around water this week, but I have to say it could have been worse.

Little disclaimer: all the photos in this post are taken with a mobile-phone camera, which is a pitty because those moments would have deserved to be captured in better quality, but you know what happens when a camera and water get in touch with each other right? Well I gladly don’t really know yet, but I didn’t want to risk anything. And anyway I can relive those moments in the best quality in my head and you just have to bear with me this time please.

First things first I took my two lovely girls to the beach after school one day. They were very happy about dipping their little toes into the cold water and playing the game of jumping over waves or not getting touched by the water, in which I happily participated by the way. 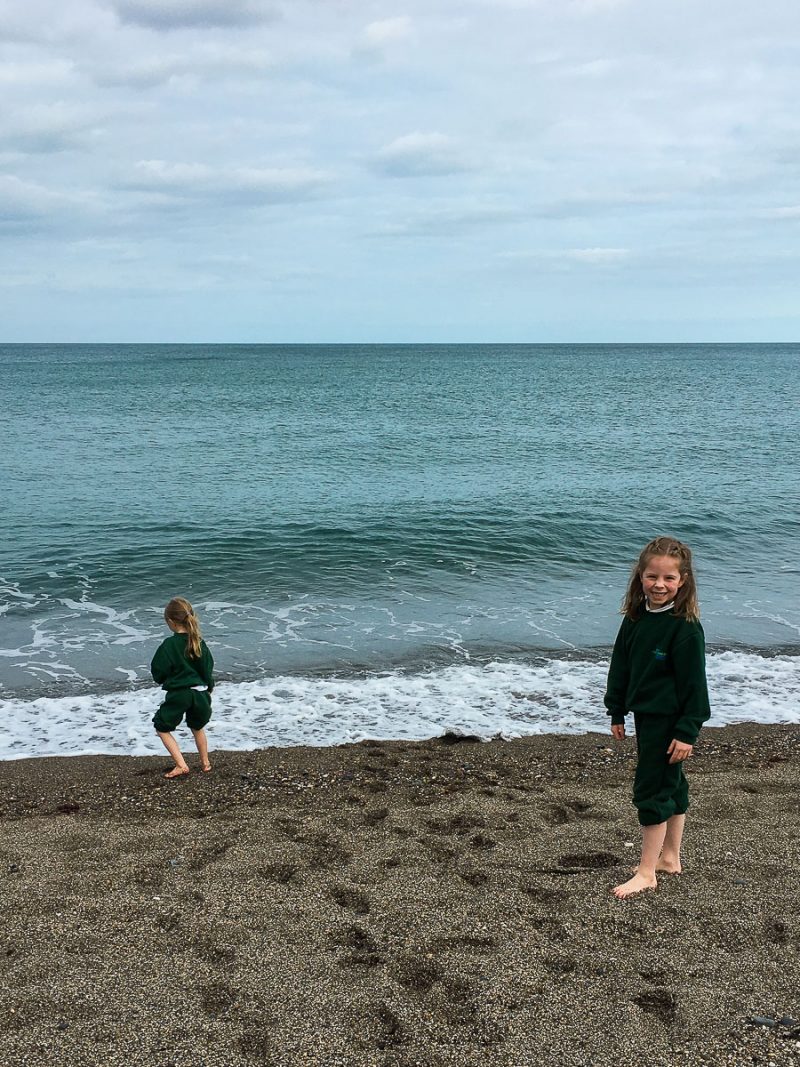 But this was just a little warm up for the next day. Because after dropping the girls to school I sat in the garden enjoying the warm sun on my skin thinking: “ If you are not doing it now, you’ll never do it.“ So I called my friend Lidia, and I didn’t even have to convince her, because she was in immediately and we went to the beach together. I have to say it cost me quite an effort to strip off my winter coat and to just stand there in my bathing suit, but when you do something together you can’t just change your mind last minute. On the count of three Lidia and I ran into the freezing cold sea, screaming and laughing at the same time, not caring about people staring at us. It was the best feeling to get out of the water and having this tingly feeling on your skin and the boost on your self-esteem rushing in, because you did it and could cross something off of your list of  „What to do when in Ireland“. 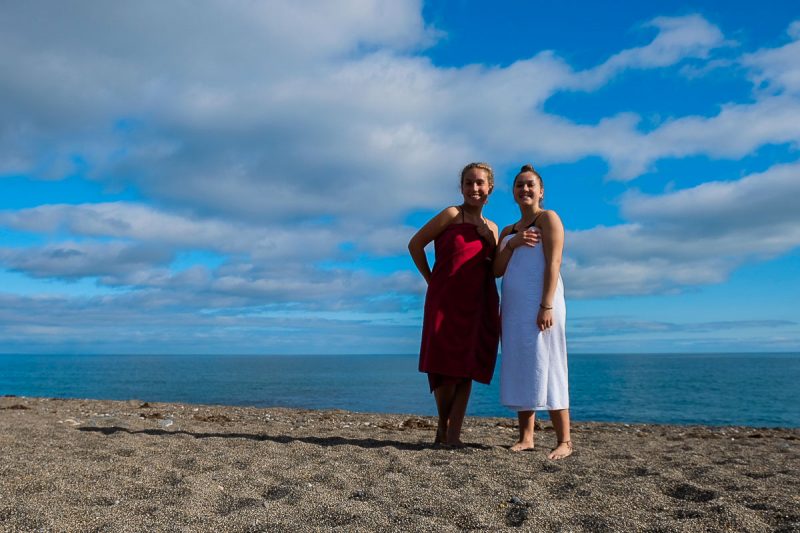 But this wasn’t the only thing I was proud of this week. Because this as well only was a little foretaste of what was next. On Firday, I packed my bags for the weekend with the warmest fluffy jumpers I own and my bathing suit ( what a nice combo) and left home early to catch the Dart to Dublin. When I arrived there I realized what I was about to do: getting on a mini-bus, with a crazy and funny busdriver and a bunch of adults ( every single one of them at least 12 years older than me ) without knowing anyone and not knowing what to expect. But I already payed for it, so there was no way out of this for me. After 3 and a half hours driving we arrived in Bundoran, a village on the West-Coast of Ireland. I was never so excited to see a place in the daylight, because when we arrived it was pitch black outside and I couldn’t even imagine how it actually looked here. 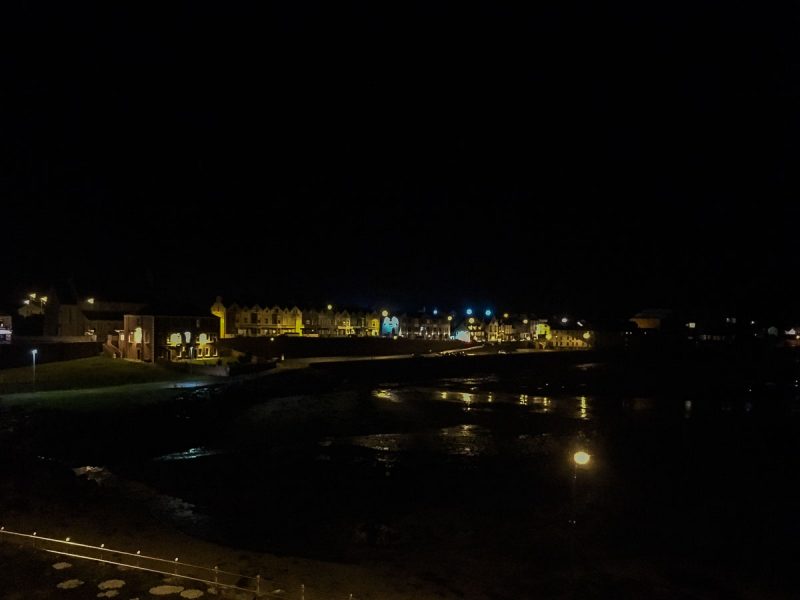 The next day was the perfect day. Not only did I wake up to a beautiful rainbow across the sea, but the sun was shining as well. After a little breakfast it was time to get into some wetsuits. And let me tell you, this was the hardest part at that day. If you ever had to get into a soaking wet, ice-cold wetsuit on a 7 degree cold day, you know what I am talking about. Then we took some pictures in the sun, while the instructors prepared the cars and then we set off. After a little warm-up at the beach, which consisted of jumping up and down and making a fool of oneself we went into the water. And if you haven’t guessed or known it yet, this weekend I tried surfing for the first time. I know when thinking about Ireland, surfing might not be the first thing that pops into your mind, but the West-Coast of Ireland is actually well known for perfectly suitable beaches for surfers.

I never thought I would enjoy falling into the water constantly, getting hit by your surfboard on the head or being in the sea, while it is storming and raining as much as I actually did. I even stood up several times on my first day, which not every beginner managed to do ( shamelessly being proud of myself there ). The second day was much harder, because as I already mentioned, it was a very rainy and stormy day, so the waves obviously were bigger and less predictable. But nevertheless I enjoyed this experience a lot and felt so alive. 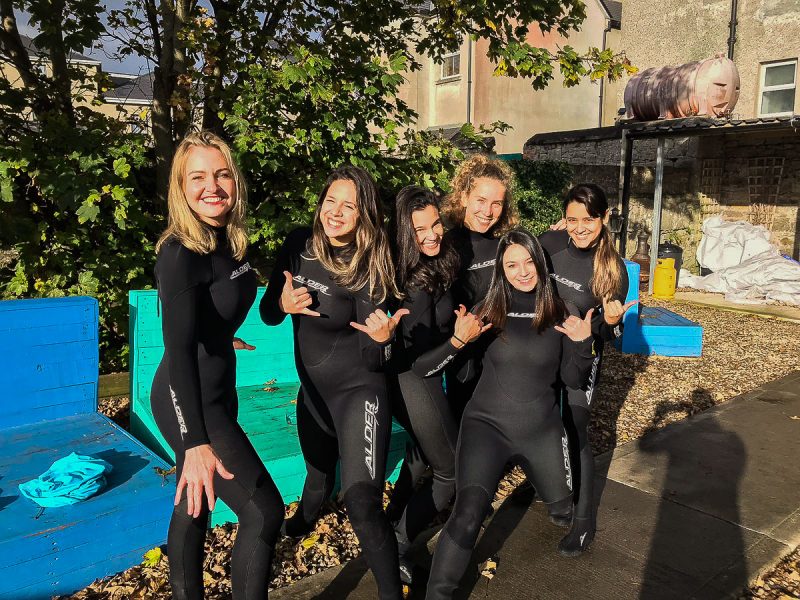 A group of Brazilian and Irish girls included me a little and I had someone to talk to and have lunch with, which I have to be honest, I was very glad about and thankful for. 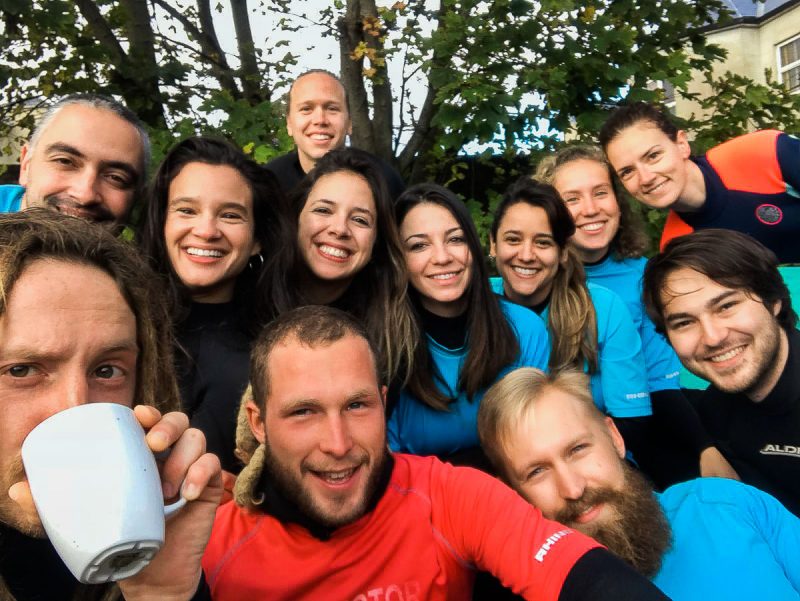 All in all I learned something completly different this week, which was a lot of fun. But this doesn’t only include surfing, but also being proud of myself, for doing this by myself and being brave enough for it.

Let’s see what the future holds for me.